Japanese cherry blossom festival to be held in Hà Nội

HÀ NỘI — The 5th cherry blossom festival 2020 will be held in the capital city in March, according to the municipal Department of Culture, Sports and Tourism.

The four-day event, to start on March 27, will include a series of activities featuring both Vietnamese and Japanese cultural identities such as a Japanese tea ceremony, chess, Yosakoi (a unique style of Japanese dance typically performed at festivals and events), and folk games. They will be held along with Vietnamese traditional arts.

Visitors will have a chance to admire the beauty of the Japanese cherry blossom – the typical flower of Japan – and try their hand at the country’s tea ceremony, kimono traditional dress, calligraphy, photos of festivals and landscapes.

They will be able to take photos with Japanese cherry blossoms and some special Vietnamese flowers at the Lý Thái Tổ Garden beside Sword Lake in Hoàn Kiếm District.

As part of the festival, conferences will be held to promote investment and tourism between Hà Nội and Japan.

The annual event is aimed to popularise the image, culture and people of Japan to Hanoians, thus enhancing the relationship and co-operation between the two countries in multiple fields.

This year’s festival, which also took place in March in central Hà Nội, showed off the beauty of some 20,000 cherry blossom branches and 100 cherry trees of Japan, along with hundreds of local flowers. 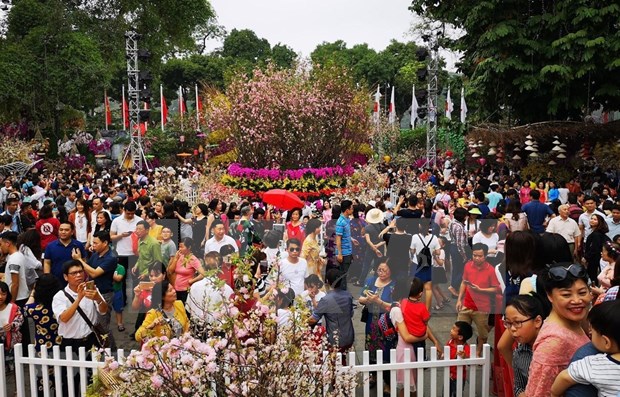