HÀ NỘI The outdoor spectacle Tinh Hoa Bắc Bộ or The Quintessence of Tonkin staged by 150 actors has received a special prize at The Guide Awards 2019 recently.

The prize honours the role of the farmers as “exceptional cultural and tourism ambassadors”.

Demonstrating the agricultural culture of northern Việt Nam, the live show is a product of the Tuần Châu Hanoi JSC, and takes place in an outdoor venue on the western outskirt of Hà Nội.

This visual spectacle has been contains more than 250 performers, of which 150 are local farmers living in the area.

Since its debut two years ago, the show has amazed thousands of Vietnamese and international spectators as it offers audience a chance to explore Vietnamese history and culture from a contemporary perspective, with an interactive water stage, and state-of-art technology.

It was recommended by CNN as a must-see for anyone visiting Hà Nội. 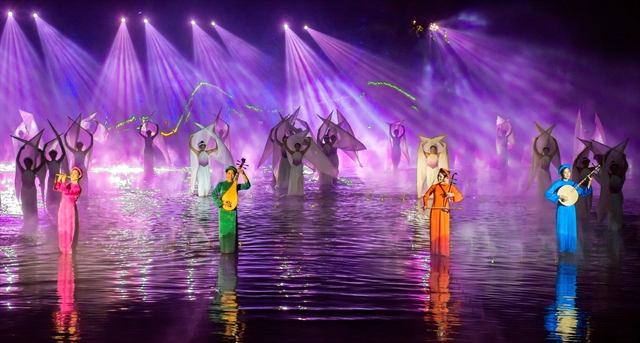 Throughout the show, the audience will be brought back to a pristine time in an old countryside region, where they can feel the sacred atmosphere as well as to learn about the cultural quintessence of the thousand-year-old-history Red River Delta region.

Not only the show spectators can explore the cultural quintessences, but also the actors.

“Working as a performer in the evening and a props maker for the show during daytime, I have gained a deeper understanding of the richness of our culture,” actress Nguyễn Thị Thanh said.

Fellow actor Đào Đức Thắng added: “I’m lucky to be a farmer-turned-actor. It’s my honour to contribute to preserving and promoting our cultural values.”

Alongside the new prize, the spectacle has also won several records and international awards.

It won two Vietnamese records for the performance show with biggest water stage in Việt Nam (4,300sq.m) and the largest number of peasant actors (150).

The show also won a gold medal for Innovation in Media, Visual Communications & Entertainment in the Asia-Pacific Stevie Awards 2018.

In July, the show was honoured as the top cultural spectacle in 2019 at the Best Hotels & Resorts Awards 2019 in Seoul.

The annual Guide Awards, which was founded by The Guide magazine in 1999, is to celebrate the achievements and contributions of enterprises, organisations and individuals in Việt Nam to the country’s tourism sector. VNS