The King ascends to the boxing throne

The bout was the main event of the Victory 8 – Legends of Hoàn Kiếm, the biggest boxing competition ever held in Việt Nam.

Sticking to their pre-fight promises, both boxers attacked from the opening bell, but much to the delight of the home support Hoàng managed to floor his opponent at the end of the first round with a series of good combination punches.

Hoàng continued on the front foot in the next few rounds, connecting with a number of precise uppercuts.

But the man from Korea stood strong, taking all The King could muster, using his experience to hold on to his opponent to slow him down.

For Hoàng, this is his first profession fight to go the distance and need the judges to determine the winner. 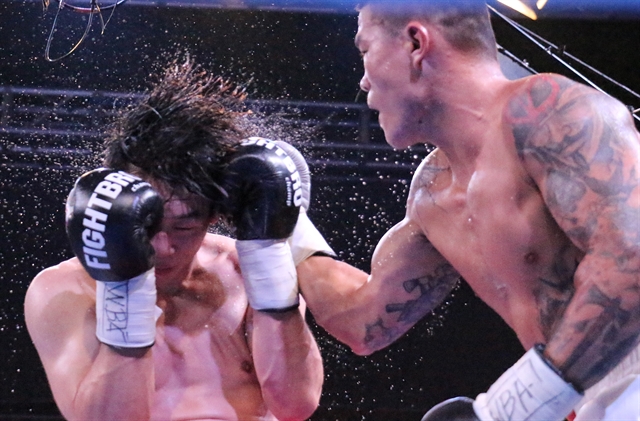 Hoàng’s previous two fights both resulted in knock-out wins, so Saturday’s match-up was a real endurance test, and The King passed with flying colours.

“Winning the belt in front of thousands of home supporters was a great feeling. It is difficult to explain this wonderful feeling. I am really proud!” Hoàng told Việt Nam News.

“It was my first time competing in a 10-round fight and I faced a rival who had great physique and he was tough under my consecutive attempts.

“He made me change my tactics so that I could box with him throughout 10 rounds. He was a really difficult opponent,” said Hoàng who will now set his sights on next month’s SEA Games in the Philippines.

Prior to the main card match on Saturday, there were 11 bouts organised between Vietnamese and international boxers.

Among them, Nguyễn Văn Đương beat Jenel Lausa of the Philippines in the men’s 57kg; Thomas Wu defeated Australian winner Michael Pengue in the men’s 67kg;