HCM CITY — Sustainable tourism linkages between HCM City and the Cửu Long (Mekong) Delta are needed to tap the huge tourism potential of the two areas, top leaders have said.

"The development of the tourism sector requires efforts from ministries and agencies to improve marketing, visa procedures, traffic and tourism infrastructure, and human resources," Đam said.

"Each locality should develop tourism products based on their cultural heritage, local communities and other tourism resources," he said.

The use of digital technology solutions for smart tourism is also vital to enhance connections between destinations, he added.

Nguyễn Thiện Nhân, secretary of the HCM City Party Committee, said that leaders of HCM City and 13 provinces and cities in Mekong Delta should develop a comprehensive tourism cooperation programme for the 2020-25 period with the establishment of a new council comprised of authorities and enterprises.

“The Mekong Delta is home to a huge resource of cultural heritage and relics which can promote tourism development,” Nhân said.

He proposed that the Ministry of Culture, Sports and Tourism promote the preservation of 100 typical historic and cultural relics in the Mekong Delta and include them in tourism marketing and promotion programmes.

The Mekong Delta should also focus on efforts to develop one tourism brand for the entire region, which would help marketing and promotion activities.

HCM City, as a trading gateway with countries in the region and other provinces and cities in the country, has created favourable conditions for tourism cooperation between the city and localities in Mekong Delta, he said.

As many as 1,200 travel firms are operating in HCM City, resulting in an increasing number of inbound and outbound tours.

However, the number of travel firms in the Mekong Delta remains small, hindering tourism connections between the region and other cities and provinces.

However, the growth in tourist arrivals remained modest compared to the region’s huge potential of natural and cultural heritage sites.

Trần Vĩnh Tuyến, deputy chairman of HCM City’s People’s Committee, said that linkages in tourism development were the key driver behind economic, social and cultural development for both HCM City and Mekong Delta.

The average length of stay for visitors in Việt Nam is 12.07 days, including 4.98 days staying in HCM City.

If visitors choose inter-regional tourism products, this will lengthen their stay and increase their spending, Tuyến said.

Tourism experts said the Mekong Delta is home to unique ecosystems and diverse communities unlike anywhere else in the country.

There is much more than floating markets, rice paddies and orchards. There are also pagodas, agricultural communities, and spectacular rural scenes, seas and islands to visit.

However, many tourists choose to visit typical destinations in the Mekong Delta due to an overlap in tourism products and uninteresting inter-regional tour packages.

The region is home to 42 typical tourist attractions while 12 other attractions are under development.

Authorities agree that underdeveloped tourism infrastructure and lack of traffic connection via roads, railways, waterways and air are major obstacles to tourism development in the region. 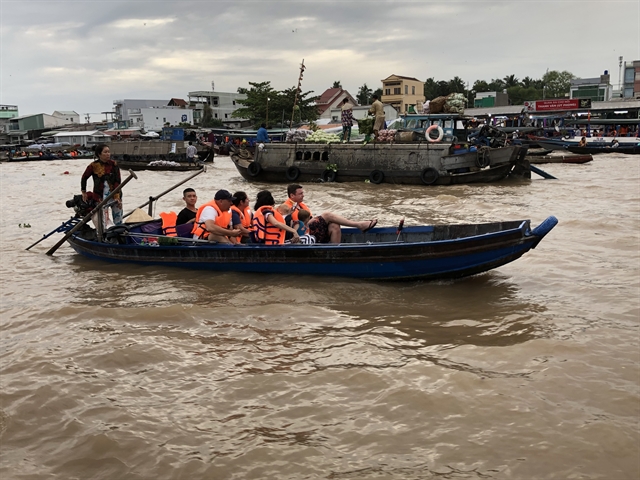 A total of 179 culture, sports, tourism and entertainment projects in HCM City and 13 provinces and cities in the Mekong Delta are seeking investment with preferential policies for domestic and international investors.

HCM City is calling for investment in 51 projects with combined capital of US$1.81 billion.

The first HCM City and Mekong Delta Tourism Connection Forum was organised under the framework of the 15th edition of the International Travel Expo HCM City (ITE HCMC) that opened on September 5 at the Saigon Exhibition and Convention Centre in HCM City.