When I drink Sangria at Casa de Espana, the newly-opened restaurant in Hà Nội, all these beautiful memories return. The taste of the food and drink here is really authentic.

Sangria is my favourite drink because it tastes wonderful and it’s easy to make. The recipe is available on the internet but honestly, the best selection of fresh fruits like apple and orange in the premium red wine imported from Spain make the one served at Casa de Espana better than any I tried to make at home.

The restaurant is quite new to the city so the menu is not abundant, however it still offers signature dishes featuring Spanish culture, gastronomy and lifestyle.

To start the meal, the waiter presented a plate of tapas, the popular dish that has become symbolic of Spanish cuisine. The small portions look eye-catching, including slices of bread, vegetables, cheese and meat.

The first one I tried was topped with minced tomatoes with olive oil and fried basil. It’s really fresh and cool for an appetiser.

The next one featured special cheese in pesto sauce. Chef Nguyễn Quang Huy said only some drops of pesto sauce are needed for the finger-sized dish.

“It’s made from fried basil then mixed with extra-virgin olive oil and pine nuts, all the ingredients are pound together to make the sauce tender, buttery and scented,” he said.

Huy also presented a slice of bread topped with salmon paste. I admitted that these tapas are simple but remarkable.

Though I still wanted to try more tapas, Huy suggested that I should move to the most special delicacies of the restaurants before consuming too much bread.

There it is – a plate of Iberian ham, nuts, raisin and cheese. The dark red and well-marbled ham is cut into slivers which are as thin as paper. The salty meat seems to be melting in my mouth at the first bite. An experience of consuming Iberian ham with Sangria is really unforgettable.

Huy told me that Iberian pork is the most delicious in the world, recognised around the globe. The pig is mixed from wild boar. It’s raised naturally in the forest and fed with oak groves and walnuts.

That’s the reason why the pork has the best quality. It’s not just delicious but also good for health.

Customers can choose Iberian or Duroc pork for the plate. While Iberian is called the black pig, Duroc is white pig. The quality of Duroc pork is not as juicy as Iberian pork but it still marks a note in my experience. 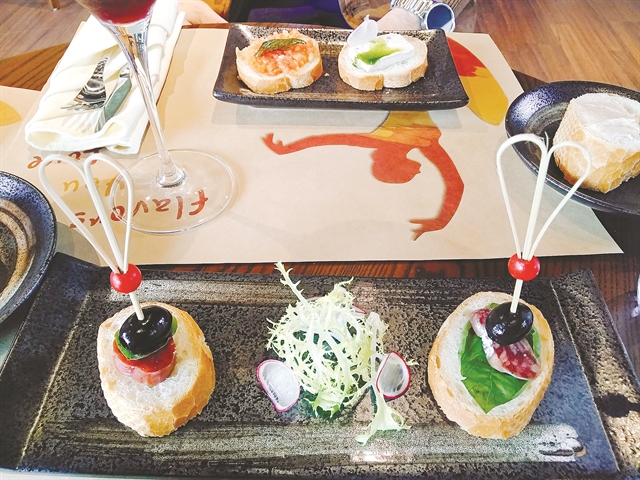 For the main course, I ordered bolognese pasta, a safe option to ensure the perfectness of the meal. I had nothing to complain about, the pasta didn’t change the good impression for the restaurant since the beginning. I didn’t leave any thread of pasta or drop of sauce.

The chef promised that in the near future, more main courses, especially steaks will be introduced. I think the reason is acceptable because the restaurant opened just two months ago. The next time when I come back, I expect there to be many new things to try. VNS