Keeping the song of the bamboo flute alive

A soil path, of over 10km in length, slippery and steep, stretches from the centre of Mường Đăng Commune, Mường Áng District, northern province of Điện Biên, to Chan II Village – home to 64 families of the Mông ethnic minority group.

By Tuấn Anh & Hải An

From the foot of the slope, heading to the village on Thẩm Hái Mountain, which is over 1,500m above sea level, you can hear the lilting sounds of the bamboo flute.

The source of the music is village elder Lý A Lệnh.

In the corridor of a wooden house, a man with grey hair and reddish skin is fully focused on making a flute. Surrounding him are dozens of pipes and hundreds of tools. Only the craftsman can name them all and understand their functions when it comes to making the instruments.

Lệnh is using a thin knife to shave a bamboo flute made of pơ mu (Fokienia) wood, a valuable wood in the locality.

Lệnh says it seemed his fate was attached to the bamboo flute, and it has become an essential part of his life.

“When I was young, I regularly went to the market with my dad,” he recalls. “The sound of traditional flutes impressed me. I could hear the sound in my dreams.”

At 15, Lệnh was so captivated by the bamboo flute that whenever he saw someone carrying one, he would ask them to let him touch it for just a few minutes.

His parents eventually sold a buffalo so he could have enough money to learn how to make flutes in a neighbouring district. 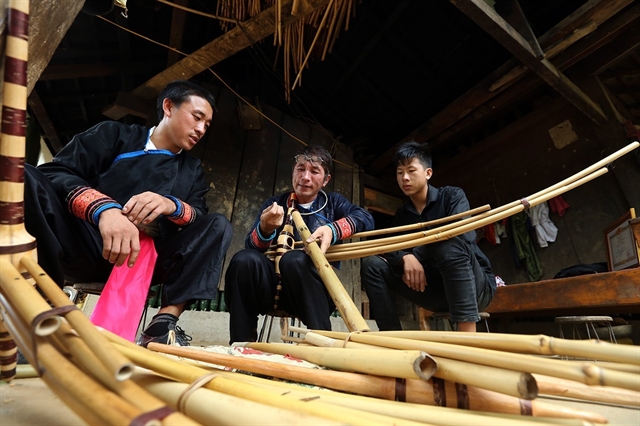 “Such instruments are simple but contain an abundant stock of folk knowledge, which is described in diversified ways through sounds and feelings.”

“They can be seen as living treasures of the group through the group’s history of existence and development in the north of the country,” she said.

“Each instrument has its own irreplaceable position in the group’s spiritual life,” she says

The body of the flute is made of pơ mu wood together with six big bamboo pipes of different sizes. The pipes are sourced from primitive forests, and from at least ten-year-old bamboo plants.

The six pipes go across the flute’s body. Each of the pipes contains a thin copper blade to make the sound. The sound depends on the adjustment of the copper blade in each pipe. When one blows on the flute, sounds from six pipes echo and create music sounds. 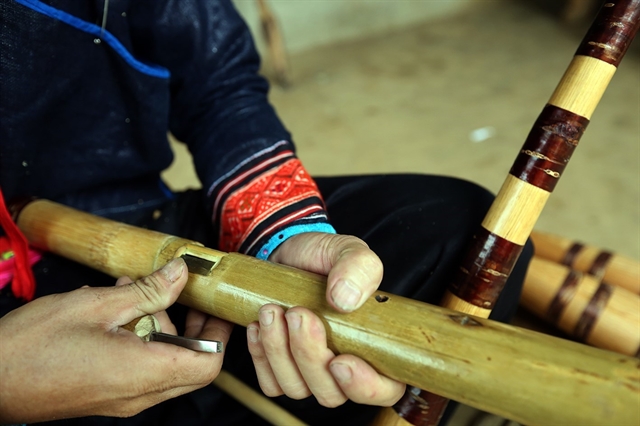 HARD WORK: Assembling parts of the flute, adjusting the sounds and decorating the flute may take three days.

In order to add the thin copper blades, the flute makers heat the metal themselves, then beat it into thin blades. When they drop the metal piece on a stone, one can hear a high and long sound. It may take flute makers a whole year to complete one instrument.

Assembling parts of the flute, adjusting the sounds and decorating the flute with polished tree bark may take three days.

“This stage requires delicacy to hear the sounds, good eyes, sensitive souls and above all, great care and passion,” Lệnh says.

Cultural researcher Dinh said the bamboo flute has a profound meaning to the ethnic Mông, which is not only a tool for living people to communicate with the dead but also the soul and identity of the group.

The flute is used during funerals to mourn the dead. In funerals, musical pieces tell the tale from birth to death, she says. 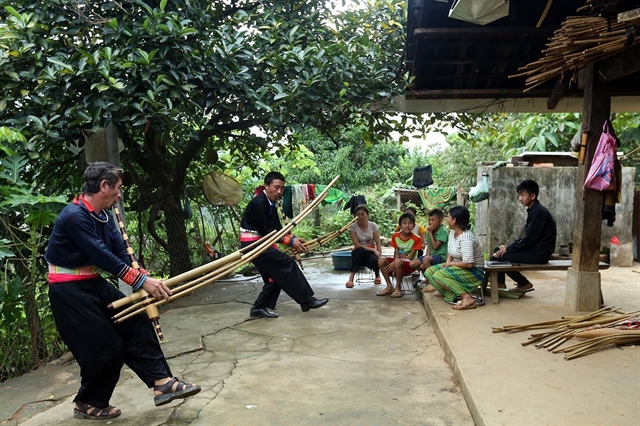 PART OF TRADITION: The sounds of the flute are songs about the community’s history.

During games and contests, Mông men play pieces praising their homeland, village, or expressing feelings. They dance while playing the music.

A traditional flute has six bamboo pipes. This number represents the solidarity of brothers and villagers.

The sounds of the flute are songs about the community’s history, motherhood, brotherhood and human principles, not only love between men and women, Lệnh says.

A Mông teenager of 13 years old can possess such a flute.

Whenever they are sad or happy, they blow the flutes to express their feelings, he says.

Those that are talented at the flute are admired.

According to Lệnh, learning to play the flute is not difficult but creating melodies is difficult. Ancient dances with the flutes are handed down from generation to generation.

“Playing the flute is difficult, but it is even more difficult to dance with the flute,” he says. “It requires a real passion to work hard with both energy and heart.”

The dance includes going forwards and backwards in four directions, dancing in a circle and a spiral.

“In order to become a master in playing and dancing with the flute, one should practise from a young age,” he says. “To have a strong, flexible body, and be able to hold your breath.”

Lệnh rarely misses important events to perform the flute. He sees it as a chance to perform and teach young Mông people.

Lệnh is worried that the instrument is disappearing.

That’s why in the past few years, he has spared no efforts to make bamboo flutes, as well as teach younger people how to make and play the instrument.

In March 2019, he was awarded the title of Meritorious Artist in Intangible Culture Heritage by the State. VNS