ĐÀ NẴNG — The top 39 candidates for Miss World Việt Nam will face off at the event's final round at Đà Nẵng’s Cocobay entertainment centre on August 3.

The event’s organising board made the announcement at a press conference on Thursday, stating that candidates will take part in competitions on July 31 before competing in the final.

Phạm Kim Dung, head of the organising board, said it’s the first time the final round will be held in the city.

“It’s a significant event in promoting culture, tourism, trade and investment in the city. The tourism hub will host the first ever a such great entertainment programme in attracting more tourists to the pristine beach and central Việt Nam,” Dung said.

“We had a good preparation in making Miss World Việt Nam an amazing event in summer holiday and a beach festival in Đà Nẵng. It’s really a favourite rendezvous in central Việt Nam in terms of culture, tourism, cuisine, hospitality and endless beautiful white sand beaches of Đà Nẵng,” she said. 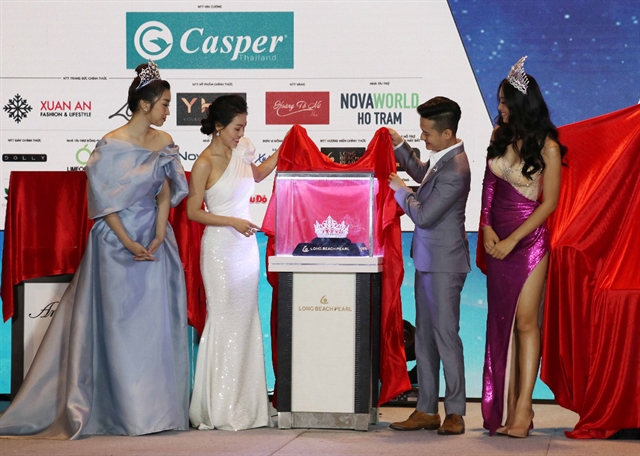 A crown worth US$130,000 is introduced at a press conference on the Miss World Việt Nam in Đà Nẵng on Thursday. — VNS Photo Lê Lâm

General director of the event Hoàng Nhật Nam said the candidates will perform a competition on traditional dances of different ethnic groups of Việt Nam.

“Candidates of the final round will qualify for the 'Dances of Việt Nam' and the best will have a solo show in the curtain-raiser event. Candidates also join tough competitions of traditional long dress, swimsuit, evening costume and behaviour contest,” Nam said.

“They will also participate in various contents of top models, the sport beauty; beach beauty; talented beauty, beauty of communications and beauty of kindness in expressing their talent and knowledge during the final round,” he said, adding that a head to head challenge will be included.

The winner of the final will represent Việt Nam in the global competition 2019 Miss World in England in December.