Rice is twice as nice in a cake – FoodTV

It was early afternoon when many people take a nap but in the rustic homes of Phan Thị Kim Ngân and Bảy Muôn in Sơn Islet (Cần Thơ City) the place was abuzz with activity. There was no sleeping. Delightful aromas of coconut and sesame filled in the air as Ngân was instructing her visitors how to make bánh lá mít (rice cakes rolled in jackfruit leaves) and bánh kẹp cuốn (crispy rolls with sesame).

Sơn Islet in Bình Thủy District has been popular among tourists since 2015 with local households offering different community-based services such as visiting fruit orchards, catching fish and cooking local delicacies.

Unlike other households, Ngân only makes traditional Mekong Delta rice cakes, but her house has always been full of visitors who wish to taste and try making the local delicacy.

According to Ngân, she initially learned to make the cakes from her grandmother and mother.

“My grandmother and mother were great cake makers,” she said. “When I was a little girl, I often watched them making cakes and helped with mixing flour or shaping cakes, and gradually fell in love with these cakes.”

After her mother passed away when she was ten, Ngân kept learning with the help of her father. Ngân also realised her passion for these beautiful cakes and was determined to continue the family tradition.

While waiting for bánh là mít to be cooked, we enjoyed our first self-made bánh kẹp cuốn, followed by a colourful platter of eight kinds of cake (called “a cake buffet”) that Ngân had prepared for us. 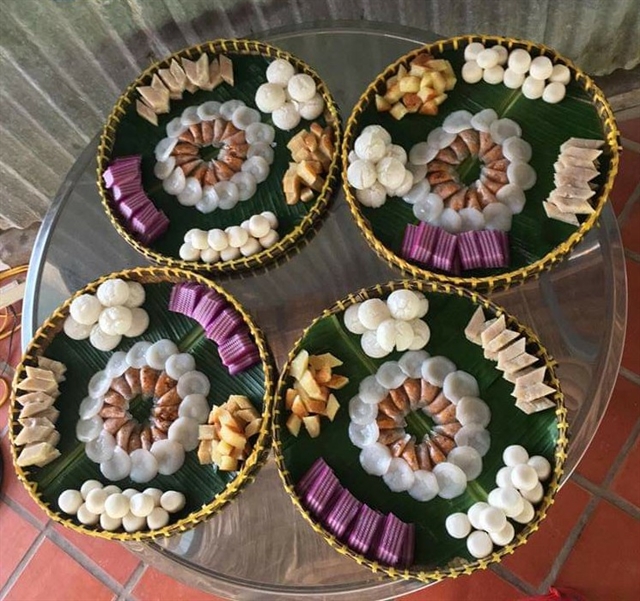 Taking one bite of bánh bò (steamed layer cake or literally translated as pig skin cake) on the platter, I was impressed by how fresh and light it was. Meanwhile, the bánh kẹp cuốn was crispy and aromatic. I had no doubt the reason for this was simple. It all boiled down to Ngân’s ingredients and methods.

“I’ve always tried to keep the cakes as original and authentic as my grandmother and mother did. This means they are traditionally handmade”, said Ngân.

The important ingredient is to choose the right kind of rice.

Ngân chooses quality and impurities-free white rice to make white, fluffy and fragrant bánh bò. For bánh kẹp cuốn, the No 504 white rice is the best as it is dry in texture but sweet and spongy when cooked, which delivers well a satisfying crispiness for the cake, she said.

Next is to make the flour. Ngân uses a stone grinder to make her own flour instead of buying pre-made at the market.

No machines are involved in her water-flour mixture making process either. Ngân said in order to produce a good flour, the makers must “understand” their mixture well to measure the water-flour ratio accurately and adjust when something goes wrong.

“It took me years to master this skill,” she said. “At the beginning, because of lacking experience, I failed many times to get the right mixture. But I kept practicing and tried other people’s cakes to see the difference between theirs and mine, thus to improve the quality of my cakes.” 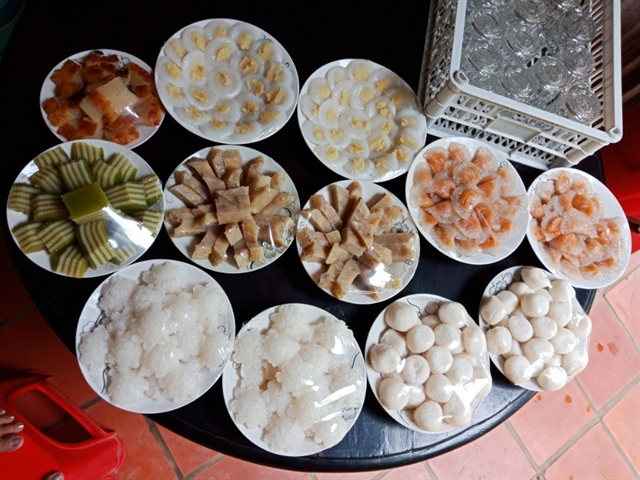 Cakes are ready to be served up. VNS Photo Hồng Minh

Ngân uses only natural and fresh ingredients for her cakes. The stunning colours of her buffet platter are imparted from plants and flowers grown in her own garden: orange made from carrots, purple from purple sticky rice leaves, green from pandan leaves and blue from butterfly pea flowers.

Another indispensable ingredient is coconut, which is also home-grown. For some cakes with chewy textures, she uses lá giang rừng (a variety of liana which grows wild in forests with sour flavour) as a thickener.  All steps are done by hand.

She said only in this way do the cakes have a pleasant and authentic flavour that cannot be delivered by machines. Although it is a laborious task, it’s worthwhile to keep the family tradition alive, she said.

She recalled how once a group of Vietnamese people living aboard visited her, they were touched to see and taste her cakes since they had not eaten them for a long time. Particularly, her conventional way of cooking preserves the flavour they were familiar with.

“Memories of my mum making these cakes for me when I was little all came flooding back”, said Nguyễn Thị Hạnh, a visitor from Hóc Môn District in HCM City after trying making and enjoying cakes at Ngân’s place. “I also learned more about the culture, people and lifestyle of the Mekong Delta region”.

“Seeing the sincere feelings of the guests makes me both happy and motivated. What I have done has connected people with their past and roots. It keeps me moving forward.” Ngân said.

Ngân is also willing to share her experience of making rice cakes to visitors.

“I’m happy to share the recipes and methods to other people as long as they want to learn and have good hearts. It is the way to keep the tradition alive, isn’t it?”

Our first hand-made bánh lá mít were eventually served. The chewy texture of the cake blended beautifully with the richness of the coconut dipping and the freshness of the leaves. Nothing is more satisfying than enjoying our own cakes while listening to Ngân’s fascinating stories about her life baking. — VNS