At the age of 64, many people decide to spend more time with their families and friends or focus on travel and hobbies, but Ha Ji-won from South Korea, who has been working and living in Việt Nam for 13 years, has been visiting poor remote areas for a month each year.

I met Ha after he had completed his walk from Phú Thọ to Sơn La, where he had given scholarships to children. He spoke about the walks that he and his friends have taken since 2014.

As a long-time member of the Association of Korean People Loving Việt Nam (VESAMO), Ha and other members in 2015 took a trip to Trà Vinh Province where he saw difficult learning and living conditions of students at Nguyễn Đức Toản Secondary School.

“Seeing the plight of the children made me sympathise with them since I also experienced a difficult childhood. This motivated me to help them," he said. “Since then, each year, my friends and I spend a month walking to poor remote areas and giving scholarships and gifts to the children there."

The following year, he walked from the Cà Mau Cape to HCM City, and in 2017, from Hà Nội to Lạng Sơn Province.

Last year, he and his friends completed a one-month trip from Lạng Sơn to Cao Bằng and Hà Giang provinces and ended at Hùng Temple in Phú Thọ Province.

In early June, he finished a walk from Hùng Temple to Sơn La Province and awarded scholarships to poor children living in those provinces.

The scholarships come from Won, the members of VESAMO, and other charities.

“The number of students who have received scholarships so far is about 30 in each province where we visited. Each scholarship costs only VNĐ3 million (US$127) to VNĐ4 million, but for children in disadvantaged areas, this is a gift that has great meaning for them.”

“When the children saw a group of foreigners coming and giving them gifts, they were excited and happy,” Ha said. “My upcoming plan this year is to raise money to build 600 metres of road to a kindergarten in Lào Cai Province.”

The school is located in Mường Khương District close to the border with China. All students at the school are poor ethnic minorities.

The road to the school is always covered in fog, making travel difficult.

Ngô Quang Nhật, who has joined the trips since 2015 for the first one or two weeks, is responsible for talking to the schools about the scholarships.

He said the purpose of giving scholarships is to motivate the children and bring them joy, so they could overcome difficulties in life.

"Last year, we not only gave scholarships to students in Cao Bằng and Hà Giang provinces but also we donated money to many schools with poor facilities there to improve their living and studying conditions,” Nhật said. 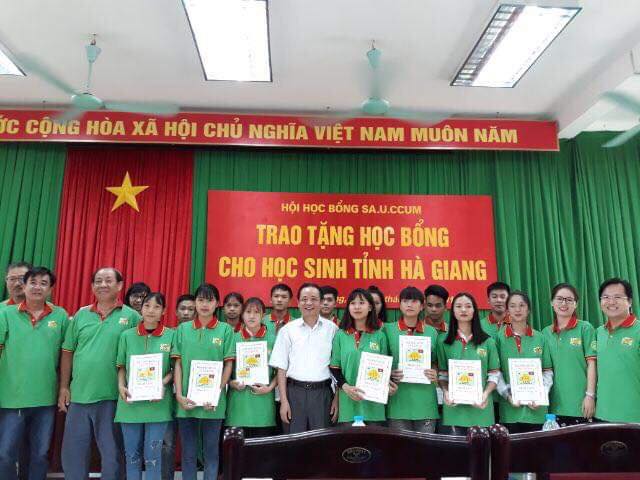 “Ha is always the person who prepares the schedule, learns about the historical relics to visit and exchanges cultural customs with the local people,” Nhật said. “Many people think that it will cost a lot to walk instead of using a vehicle. However, we always bring our own food and drink, and sleep in local people’s houses."

Ha said that walking helps him see "the landscape to the fullest and have the opportunity to meet and chat with the locals so I can understand their living conditions and culture here.”

“Before each trip, I have to contact charity organisations to call for donations and the local authorities to receive a list of poor children in the area,” he said.

The total distance that Ha has travelled so far is 3,520km. He expects that by 2022 he will complete 5,000km, the figure he originally proposed to celebrate the 30th anniversary of the establishment of diplomatic relations between Việt Nam and South Korea.

“I would like more people to join me to help children in poor remote areas. You do not need to spend a month to join, but you can join for two to three days with the group to feel the meaning that this journey brings to the poor children,” Ha said.

Kim Min Goo, who joined the latest trip with Ha, said: “The trip takes time, but we don't have difficulties. We just want to be able to help more people.”

To make a donation to the group, email jiwon5652@daum.net. — VNS