Vietnamese pagodas among some of world's most beautiful

HÀ NỘI — Trấn Quốc Pagoda and Bửu Long Pagoda have been listed as some of the world’s most beautiful Buddhist pagodas by National Geographic.

The list of 20 top pagodas to visit was published by American National Geographic recently.

Located on an eastern island of West Lake in Hà Nội, Trấn Quốc Pagoda is one of the oldest pagodas in Việt Nam at more than 1,500 years old.

It is famous not only for its ancient beauty but also for its fresh and green space combined with its architecture, cultural history and nature.

The pagoda was built in the Lý Dynasty between the year 541-547 in Yên Hoa Village near the bank of the Hồng (Red) River with the name Khai Quốc (Opening A Country).

The pagoda includes an 11-storey tower which is topped by a nine-storey gemstone-made lotus. Opposite the tower is a large bodhi tree donated by the then Indian President Rajendra Prasad when he visited Hà Nội in 1959.

The ancient pagoda still holds a lot of valuable objects such as meticulously crafted statues. The pagoda's Nirvana Buddism statue is one of the most beautiful nirvana statues in Việt Nam.

HCM City's Bửu Long Pagoda has a campus of more than 11ha located on a hill west of the Đồng Nai River in the National Cultural History Park in District 9. 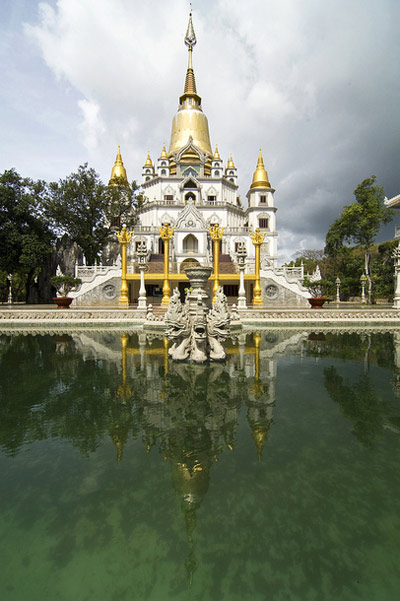 The pagoda features carved dragons that curve down the temple stairs and a turquoise pool that reflects the temple’s white walls and golden spires.

It was built in 1942 by Buddhist Võ Hà Thuật. In 1958, he offered the pagoda to Monk Lão Tâm – the first monk of Vietnamese Theravada Buddhism.

Bửu Long Pagoda has a Gotama Cetiya Tower which is over 70m tall. The pagoda's architecture combines modern and the most ancient style of Suvannabhumi civilisation in Southeast Asia.

Other padodas in the list include Bagan in Myanmar; Wat Benchamabophit Temple in Thailand; Seiganto-Ji in Japan; and Paro Taktsang in Bhutan. — VNS