The marker was installed with the agreement of three countries on June 27, 2005. Made of granite, it is two metres high and has three sides to face the three nations. Each side is engraved with information in each language and the national emblem of each nation. 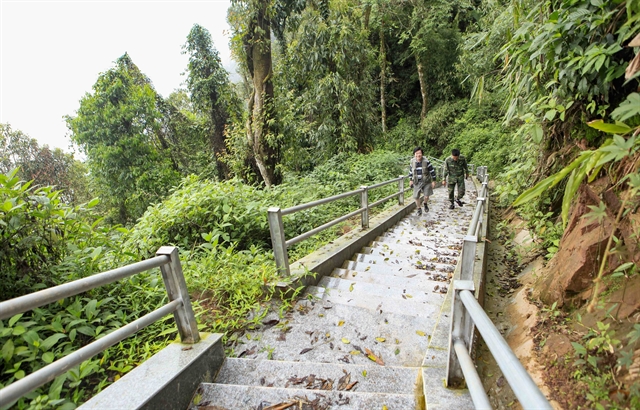 Visitors climb a staircase leading to the scenic viewpoint and the marker.

This is the border junction between Việt Nam, Laos and Cambodia. People always joke that this is the place where a cork crows and people from three countries can hear.

The area is among the top destinations of backpackers and travellers.

In the past, in order to visit the milestone, border soldiers and tourists alike had to trek through the forest.

The spectacular scenery of the site.

Now, a road and staircases have been built to make the trip easier.

A Pa Chải is located some 250km from the centre of the historic city of Điện Biên Phủ, home primarily to the Hà Nhì ethnic minority group. In Hà Nhì language, A Pa Chải means a big flat land.

A carved stone stele provides information on the westernmost point of A Pa Chải.

There are two different seasons in the area: the rainy season from April to October and the dry season from November to March with average temperature of 21-23 degrees Celsius.

A Pa Chải is also home to an old forest with diverse flora and fauna.

A signpost gives direction to A Pa Chải and the milestone.

It is advisable for tourists to come to the area in the dry season between November and March, when it’s easier to travel without the risk of landslides and slippery roads. — VNS