Final touches have been completed for the International Military Sports Council's (CISM) Military World Games, the so-called Olympics for military personnel, which will be held in Wuhan City, China's Hubei Province in October. 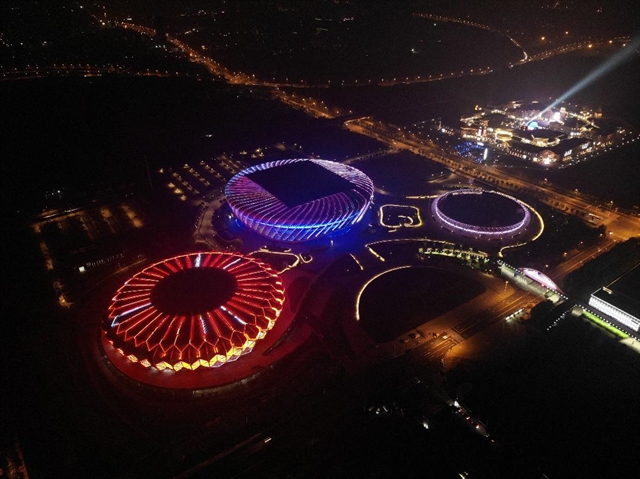 STADIUM OF LIGHT: The Optics Valley International Tennis Centre is one of the venues at the 7th Military World Games. It will be converted into a public facility for sports events after the Games. Photo courtesy of China Daily

The seventh edition of the tournament, the highest-standard multi-sport event for soldiers from across the globe, is expected to welcome more than 10,000 athletes from more than 100 countries including Việt Nam. They will compete in 329 events of 27 major sports such as aeronautical pentathlon, military pentathlon, naval pentathlon and parachuting, as well as Olympic sports such as football, equestrianism, swimming and basketball.

Among sports, tennis is a demonstration sport; track and field and archery will be also organised for para athletes; badminton, table tennis, tennis and men's gymnastics events will be held for the first time; and boxing will be open to female athletes; while organisers believe that the pentathlons will receive a lot of attention. 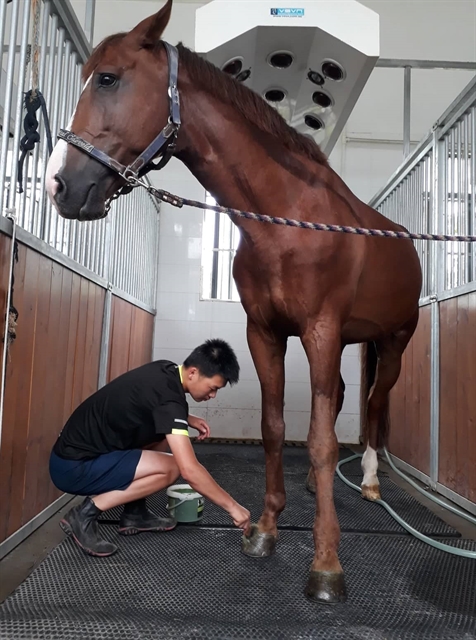 READY TO RIDE: A worker takes care of a horse which was imported from Europe for the equestrian event at the Games. VNS Photo Thanh Hà

In contrast to previous editions, this year’s event will be open to the public and for the first time is organised in one place, which is known as the 'city of a hundred lakes'.

"The World Military Games is a young international event. The Wuhan Games is the seventh one. It has made many breakthroughs and created new records. All competition events are going to take place in one city. The total number of competition events has hit a record high. It’s also the first time we have a newly constructed Athletes' Village," said Zhang Shihua, vice president of the Executive Commission of the seventh Games.

"It is the first time for the Games to be held outside military barracks, supported by the national government, co-organised by the military and the locality."

The construction work on 35 venues has been completed, many preview events have been held and more than 200,000 volunteers are set to take part in making sure the global event runs smoothly. That athletes’ village is ready to accommodate 12,000 athletes and officials.

"The event scale is only second to the Olympic Games. We have full determination and confidence that we will present the world with an extraordinary international sporting event," he said.

China Daily reported that President of the CISM Herve Piccirillo visited Wuhan many times to inspect preparations for the Games. He said the organising committee and local government had carried out the preparations well.

Piccirillo was also impressed by the accommodation and the sports infrastructure in the city. He believed military athletes from all countries would appreciate the great effort made in the spirit of the Games.

"The Military Games is a global event. Military athletes from all countries gathering in Wuhan will fully interpret the essence of peace and friendship," Piccirillo was quoted as saying by China Daily after he visited the venue last June.

At the one-year countdown of the event last year, soldiers from Hungary, Tanzania and Brazil brought water from the Danube, the Nile and the Amazon to pour into the Yangtze River, which runs through the city, to symbolise peaceful development.

Delegations from Germany, Brazil, the Netherlands and Oman have also visited to inspect preparations, and were satisfied with the progress.

Last Thursday, a torch of the games was lit in Nanchang, Jiangxi Province. It will be carried through Chinese regions and army sites by torch bearers. The torch will arrive at the main venue of the games in Wuhan on October 18 – the day of the opening ceremony.

After the closing of the Games on October 27, the venues will be open to the public for sports events, exercise, school physical training and national defence education.

The Games, which made its debut in Italy in 1995, is a multi-sport event organised every four years by the CISM which was founded in 1948 and based in Brussels. The last edition was held in South Korea in 2015 when China was given the right to host this year’s Games with Wuhan named host city.

Wuhan is one of China's most picturesque cities with 165 rivers, 166 lakes, and 6 national wetland parks.

The longest river in Asia and third biggest in the world, Yangtze, and its biggest tributary, Han, divide the city into three towns, namely Hankou, Wuchang and Hanyang, covering an area of more than 8,500 square kilometres, with a population of more than 11 million.

The city is a scientific and educational centre in Central China with 35 higher educational institutions. It is a major transportation hub, with dozens of railways, roads and expressways passing through the town. And the city is home to 88 high-end stadiums and sports facilities, which was one of the reasons why Wuhan was chosen to host this year's Games. VNS

Mascot Bing Bing, in mandarin, is a reference to soldiers. It was inspired by the Chinese sturgeon, a critically-endangered fish.

The emblem is a colourful ribbon shaped like the number seven and decorated with stars. It embodies the natural landscape of Wuhan.