This seasonal speciality is ngần, a tiny, boneless fish. Its white body looks like a rice noodle except for the small black eyes.

The species grows naturally in the river, eating algae. They are difficult to raise, so they have become a precious seasonal treat.

When the Đà River floods, the ngần fish season begins. People take to the river and enjoy an abundant catch. Families cook their favourite dishes and housewives stock up on the fish and freeze them for later use.

The best quality fish is caught at the beginning of the season, when they are sold at high prices around VNĐ200,000 (US$10) per kilogramme. When the season begins to wind down, the price drops to about VNĐ100,000 ($5) per kilogramme. I often buy one kilogramme at a time, just enough to cook three different dishes for a meal.

The fresh fish are soaked in salt water and rinsed before cooking. Because they are a natural product, there is no need to worry about preservatives or pesticides.

Chả cá ngần (ngần fish balls) are one of my favourite preparations, and they get the whole family involved. My husband helps pound the fish and my son loves to knead the clay-like fish paste into balls.

The ingredients for chả cá ngần, ready to be combined. 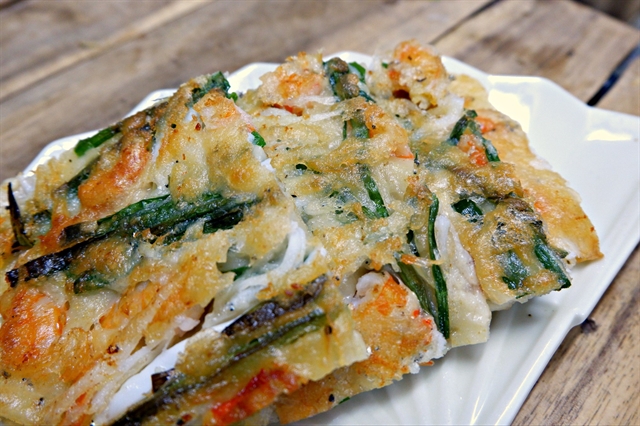 The fish balls are served with rice noodles and dipping sauce that combines hot, sour and sweet tastes. It's the ideal dish for a summer day.

To make the dish, the ngần fish is divided into two parts. While half of the fish are kept whole, the other portion is pounded by hand into a thick paste. Necessary ingredients include salt, pepper, spring onion, one egg yolk and fennel.

I like to add a little minced pork to make the mixture softer and easier to shape into small balls.

As the balls are fried in hot oil their enticing smell fills the room. They come out golden brown, crispy on the outside and soft and moist inside.

Ngần fish can also be used to make delicious Korean-style pancakes. To save time and get the proper texture, I follow food blogger Nguyễn Kim Chi's advice and use instant flower imported from South Korea.

One part flour is mixed with 1.5 parts water. The instant flour creates an authentic and balanced taste without any need for extra spices.

I put threads of spring onions and carrots into a hot pan then add a layer of the flour mixture and a layer of fish. You can add other seafood at this stage for a different taste, but I decided to keep simple. Cover the fish wish another layer of the batter and cook the pancake until it is crispy.

Food blogger Chi recommends dipping the pancakes into a sauce made from soy sauce, sugar, sesame and vinegar.

I enjoyed the first two dishes, but I knew no meal of ngần fish would be complete without sour soup. This dish is so simple – just cook chopped pineapples and tomatoes in water and add the ngần fish at the end.

Down south, the flood season in the Mekong River Delta between the seventh and 10th months of the lunar calendar yields a different delicacy.

Linh fish are small – roughly the size of a finger – and travel in schools, letting residents catch large numbers in bamboo baskets.

Like ngần fish, linh fish are a gift of nature. They are sometimes called "silver of the river" because of their sparkling bodies. 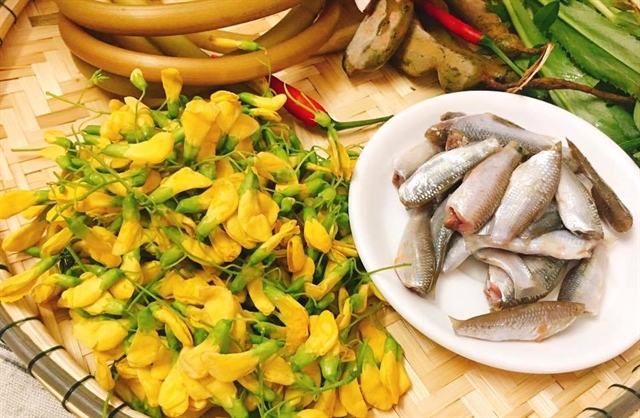 The provinces of An Giang, Tiền Giang and Hậu Giang are famous for their fish sauce made from linh fish.

Local fishermen know many different ways to cook linh fish. They grill the fish on bamboo sticks, stew them with coconut juice or make sour soup with điên điển flowers. Don't miss these specialities next time you are in the Mekong Delta during the flood season! VNS